5 Lessons on Leadership from a High School Volleyball Coach 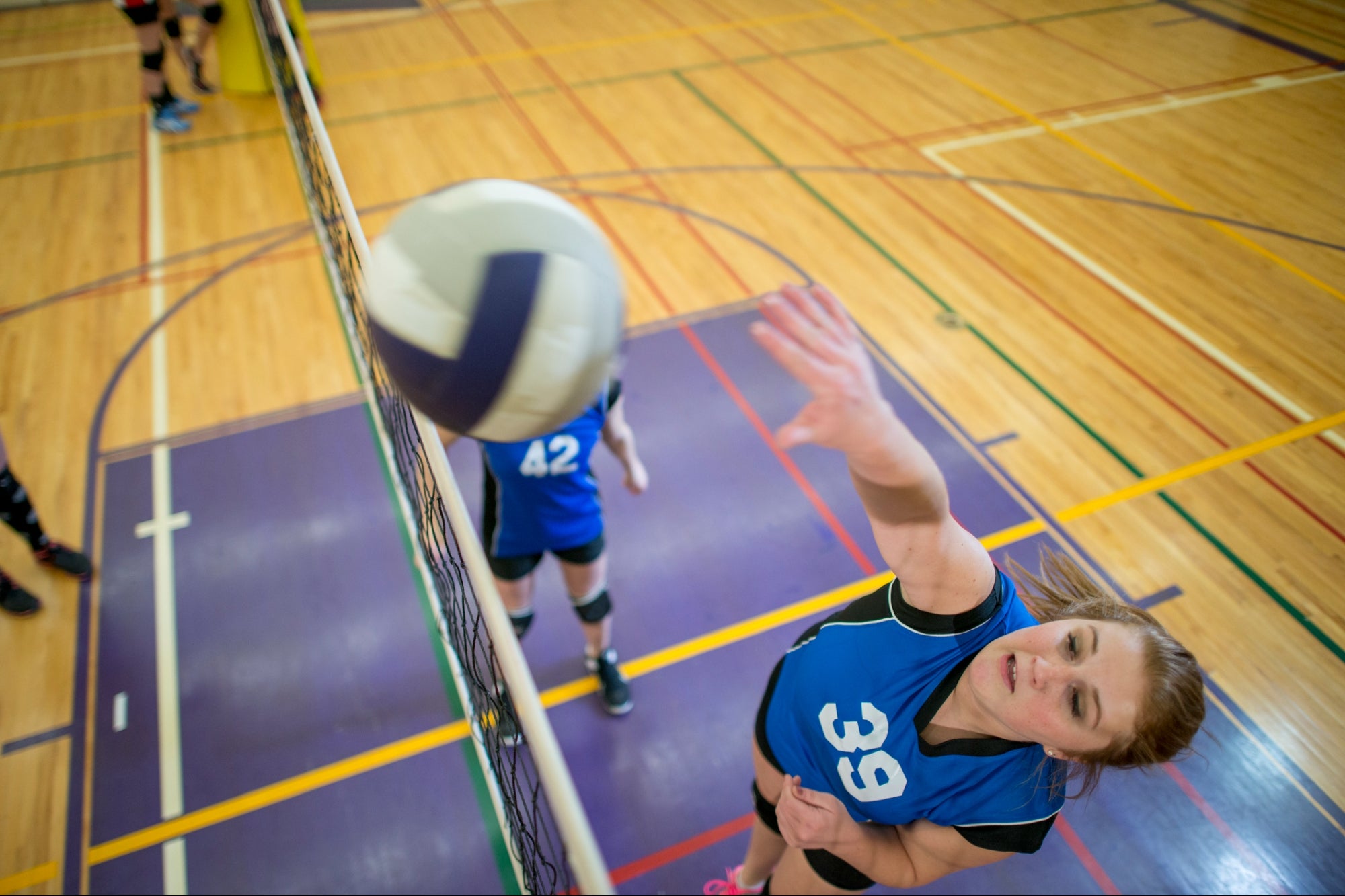 My daughter’s high school varsity volleyball team won the state championships last month. It was an amazing experience to watch, even more so because this group of girls is incredible. They support each other, like each other, visibly and audibly have fun when warming up or playing together and credit their success to being 14 strong. They worked hard, enjoyed every minute and achieved their goal.

But while I am happy for and proud of my daughter and her teammates, their success came due to trickle down. The team achieved success because of their coach, the leader of this group. It was due to this woman’s integration of powerful leadership skills that the team succeeded.

There were five specific things Coach R did that made her stand out as a leader and brought her team to the championship level:

1. She created a platform of unity

Coach R made sure there wasn’t a spotlight on one or two players. There was no star of the team. Those on the bench were as valuable as those on the court. When she was interviewed after winning the State Finals game, Coach R said, “The U.S. volleyball team, their motto is ‘23 strong.’ Even though only 12 players went to the Olympics, it took 23 players to get them there. And so that’s the model that we’ve embraced this year. It takes all 14 of us to earn the state championship, even though not every player was on the floor tonight.”

In an organization, this approach is also true. Consider your own organization. Is the success of the organization reliant on one member, or the team? And if the focus is on one team member, what does that do to the organization? The other team members feel devalued. They stop giving their all. They lose sight of the goal. And where does it leave the organization if that one star leaves? Left behind is a disjointed, disconnected and dissatisfied group of people. The unity Coach R created became the platform for the team’s approach to the goal.

Related: How to Be a Leader Who Brings Unity and Calm to Your Team

2. She created a shared mission and vision

Winning the state championship honestly didn’t seem like the sole purpose of the season. While going to states is a vision for most high school or collegiate teams, it seemed that for Coach R the vision didn’t smother the mission she created with the team. The mission was twofold: Play their best and have fun. Watching the team the night of the championships demonstrated that mission. The girls were singing and dancing the whole time as they waited their turn to warm up. They weren’t letting stress or anxiety get in the way of their fun. They were meeting the season’s mission even in what was the biggest athletic night for them. Coach R made sure the girls knew they didn’t have to do anything different than they did every game. She led her team in this mission that guided them to attain their vision of the state championship.

The same applies to your organization. Ensuring everyone within your organization knows the long-term vision but buys in to the daily mission to get there…and then keeps the mission alive even in the face of the vision.

3. She recognized her players as individuals not just players

This was my daughter’s first season with this coach after transferring to the school. My daughter came home after practice one day and when I asked her what she did to kill time between the end of the school day and practice, she casually said, “I had my 1-to-1 with coach today.” Huh? I had no idea what she meant. Turns out, Coach R schedules time to meet with every player during the season. She sits with each girl and while she certainly asks about the player’s goals for the season, more importantly she connects with each girl as a person. She asks real questions and they get to ask questions to her. They talk as people, not as coach and player, not as adult and kid but as women and athletes.

Can you imagine what this creates and what the same practice could do within an organization? Coach R’s players feel a real connection to her and her to them. It builds trust. It builds commitment. It increases performance and retention whether in a volleyball program, in a family or in a Fortune 500 company.

4. She demonstrated the behavior and thinking to support the mission

Coach R never yelled other than in excitement. She never demonstrated frustration. She was either smiling, offering praise, giving motivational talks or offering coaching strategies for players to use towards the team’s mission and vision. Coach R’s team saw this every time they looked at her or heard her. Their coach’s attitude and actions became the standard they emulated. She became the model of how to be and they all adopted that model. There wasn’t room for negativity because it would’ve been an outlier, an anomaly and in fact when typical issues came up through the season, the team quickly dealt with them and positioned themselves back in line with Coach R’s standards.

Related: 4 Behaviors Leaders Must Model to Build a Culture of Trust

As a leader in your organization, you can do the same. Certainly there are times that are challenging, but does expressing anger, frustration or disgust move you close to your vision, or further away? What behavioral, cognitive and emotional expressions help keep your team on track and focused on the mission and vision?

5. She emphasized trying over succeeding

Of course Coach R wanted her players to succeed but the emphasis was not on succeeding. Coach R emphasized trying. Try a new skill. Try a new approach. Try coming to practice when you’d rather quit. Just try. Because what Coach R knew was that the only way to succeed was to try because in trying, her players learned. They learned what worked or what didn’t work. They learned they could accomplish things even when it was hard. They learned that sometimes trying meant failing but that they could learn from those failures in order to grow.

Encouraging people within our organizations to try can achieve this same level of success. If we focus only on successes, people are less likely to take chances. They are hesitant to think outside the box. They stick to safe ways of doing things and this will eventually lead to stagnation. So ask yourself what is more important? To create a culture that only values success or to create a culture that promotes trying in order to foster creativity, growth, learning from failures and yes, eventually, success as a outcome of trying.

Overall, the leadership of Coach R worked for one reason: She led based on her own style. Coach R didn’t try to fit into a prescribed type of leadership. She didn’t base her behaviors on famous coaches in an attempt to duplicate their leadership. She created a leadership style based on her values, her strengths and her vision for her players, not the group’s state championship vision, but her vision as the leader of a program in which each player grew, personally and athletically, because of the support they gave and received from their team. “It’s the buy in. They buy into each other so hard, it’s ridiculous,” Coach R said. “Their strength is in the group. We work really hard in the gym every day on our skills, but we know at this age level having that cohesion can bring you from a five to an 11. They buy into that. They work hard every day, but it’s because of each other … that’s what makes them truly special.” All due respect to Coach R, while it was due to the players’ connection and support of each other, even more it was because as a leader Coach R created and showed what it means to be part of a winning team.

Once upon a time, protecting the wellbeing of employees might have been viewed as a luxury for a few...

Ask Yourself These 5 Questions to Make Better Decisions

According to the 2019 Nobel Prize winner in economics, Daniel Kahneman, all decisions are made with partial information due...

Your Team Has Natural Talents. Here’s How to Unleash Them.

I spend a lot of time working with my dogs. As I learn more about each breed's personality, it...

Behind the Review host and Yelp's Small Business Expert, Emily Washcovick, shares a look at this week's episode of...

3 Critical Lessons When Changing Your Business and Journey

Leadership isn't easy, nor is entrepreneurship. Bringing a new idea or concept to market is a dream for many,...

You're reading Entrepreneur Middle East, an international franchise of Entrepreneur Media. Working with governments and policymakers to advance sustainable...

The Steps You Need to Take to Make the Move

2 Stocks to Add to Your Must-Buy List in Q4